The Battle against Late Blight, From the Irish Potato Famine to the New Millennium 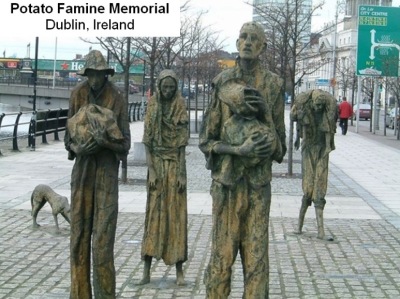 While hard to believe, the Late Blight pathogen that caused the Irish potato famine in the 1840s and 1850s and caused the starvation deaths and forced migration of hundreds of thousands across Europe, is still a major concern in food production worldwide. The fungus-like organism, Phytophthora  infestans, is aggressive and can cause disease that can rapidly destroy whole fields of potatoes  and tomatoes. This centuries old threat is still with us and causes major concerns for potato growers in Wisconsin each year!

The pathogen can be spread quickly over whole areas by wind movement of its spores from infected source plants. These are either brought into the state as already infected tomato transplants or seed potatoes or can develop locally from un-harvested tubers or crop waste that survive freezing.  Because it can spread so rapidly under cool moist conditions, Late blight is considered a ‘community disease’ that can affect both commercial growers and home gardeners alike. Crop fields must therefore be monitored   early to detect symptoms and potential disease sources.  Growers ensure that seed is disease-free to prevent the introduction of the pathogen into the fields. They control potato volunteers and nightshade weeds that may be infected in and around production fields. And, by WI state law, growers, homeowners and garden centers are required to destroy all disease sources by May 20th before the start of the growing season.

Since late blight can cause devastation to the crop throughout whole regions, growers typically destroy large portions of fields if even a tiny pocket of late blight is found as this is the only effective way to stop the disease from spreading to other fields or neighbors. Growers also limit the spread of disease from field to field by sanitizing all equipment (even their own boots!) before entering fields to avoid spreading the spores of the pathogen.  Good stewardship in the growing community is critical in keeping late blight under control across the state and throughout the northcentral production region.

In partnership with the Potato and Vegetable Pathology Laboratory at the University of Wisconsin-Madison, under the direction of Professor Amanda Gevens, growers also use a sophisticated disease- forecasting model that uses data from weather stations throughout the state to pinpoint when they should begin applying crop protectant materials in each area to limit late blight from developing in fields.  This forecasting model (Blitecast) calculates disease severity values, which accumulate when conditions favor disease development, usually during moderate temperatures, high humidity and rain.  In newer versions of the model, weather forecasted three days into the future is also being considered in helping to determine the level of risk and the most appropriate timing for the application of crop protectants.  This advancement strengthens the utility of the Blitecast and enables growers to exercise greater proactive control of late blight.

Although Wisconsin potato growers are always aware of the late blight threat, others in the ‘ growing community’ might not always be so alert to the danger, which is why growers actively share late blight occurrences with other growers, garden centers and home gardeners across the region. UW-Madison Plant Pathologist Amanda Gevens sends out state-wide updates on when to expect problems and then alerts growers to locations where the disease has been documented and how severe the outbreak is.  She actively discusses late blight concerns with local media to ensure that the general public is aware of the potentially devastating effects of this serious disease; gardeners are encouraged to destroy garden areas quickly if infection is found to protect other homeowners and local farmers. In recent years, the late blight pathogen has been imported into Wisconsin on tomato plants sold in local garden centers and farmers markets, so it is critical that the public is not only aware of late blight but know to be watchful and ready to act!   Late blight disease management is a truly a ‘community’ effort!

Never the less, the battle against late blight continues as the pathogen evolves over time to create new strains that can differ in host range and severity or can interact to potentially produce overwintering resting spores. If the pathogen develops a soil-borne spore and thereby the ability to persist from season to season, retooling management efforts against late blight will be necessary.  Dr. Gevens and her students are actively engaged in monitoring the status of the pathogen population to better understand this soil-borne risk and will be ready to support growers with any new management measures that may be needed.

Our food security is too important to be placed at risk by failing to act quickly when danger threatens. The Irish had little knowledge of what the disease was in the 1800s and no weapons to fight it. The resulting famine had tragic and global consequences. The disease is still with us today and can be just as destructive but science is now providing us with the tools to fight it and it is essential that everyone in the community joins the battle.

Plant the seed with others:

Water – The Critically Important Resource for our Nation’s Food Security